We live in a wonderful world that is full of beauty, charm and adventure. There is no end to the adventures of can have if only we seek them with our eyes open – Jawaharial Nehru, 1st Prime Minister of India.

I have chosen today’s quote because I have really enjoyed wandering along with my eyes open. Sure, I have maintained contact with my “home” world via the readily available and ever-present wiffee. But at any particular moment I’ve tried to maintain an awareness with the wider environment, and in so doing be in touch work its “beauty, charm and adventure”.

Which brings me to today. I’ve got just a few photos to share. Our hostal at Frómista was delightful, in part because it just was, and mostly because of the delightful infectious friendliness of our hostess. As we left she insisted that she take a photo of us in front of her casa. 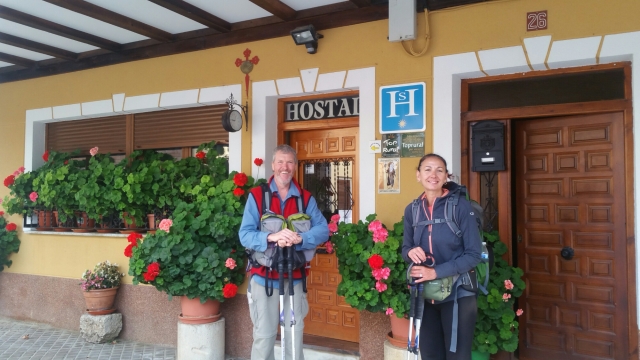 But today was not a day which presented many photographic opportunities – or was more a day for just walking and being.

Our first stop was at Población de Campos, for 2nd breakfast. From there we took the path less travelled, heading off to Villoviecoand then to the puente at Ermita de la Virgen del río, this latter section along the banks of the Rio Ucieza.

Villovieco was a surprise at a couple of levels. Firstly I saw what I took to be the first wheat silo in the area. I’d been discussing this with Paddy the South African farmer last night – that there are huge wheat fields and no obvious supporting infrastructure. Now one silo does not an infrastructure make, but at least it was a start!

But Villovieco’s great surprise was Pepe the almond dispenser. Pepe stationed himself on the bridge over the Rio Ucieza. Armed with a huge bucket of almonds and a nut-cracker, he stops all peruginos and gives them a handful of cracked almonds. We chatted to him (us in slow and very rudimentary Spanish, he in rapid-fire replies), and deduced that he has lots of almonds and he likes to give them to the travellers. As has often been the case, he took a liking to Janet. So not only did we get some extra almonds, he insisted on placing a sello in our credencials, and then writing each of us a personal inscription (which we can’t yet decipher and so translate). He was a delightful old señor I guess really embodies the spirit of the Camino. 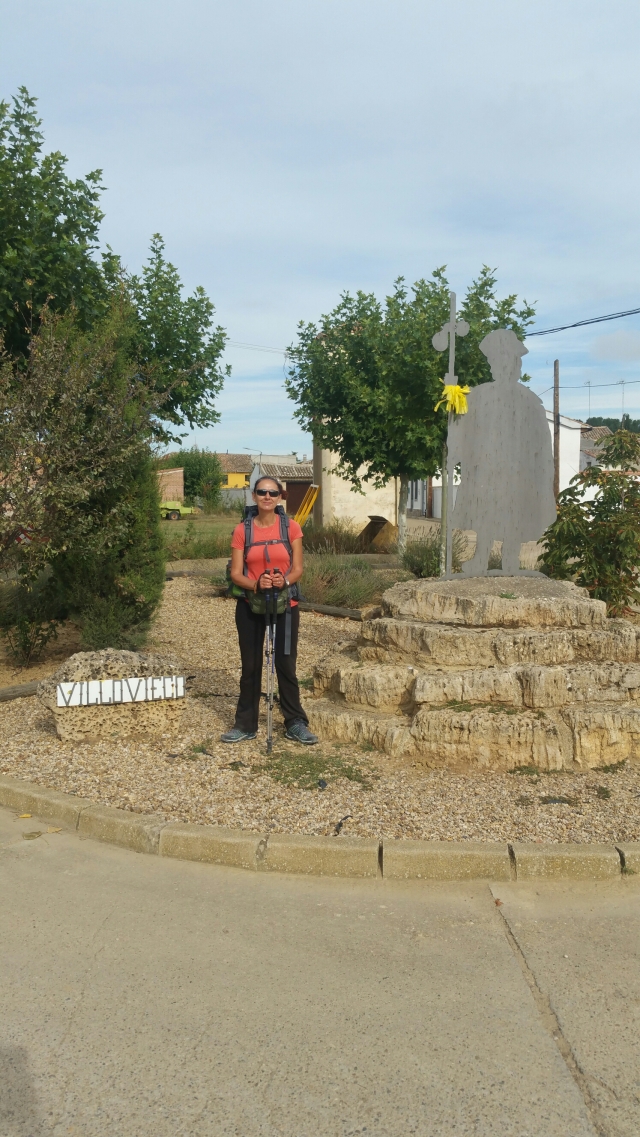 So with a lightness of heart we headed off on the ~5 klms along the Rio Ucieza. The rio itself is not particularly pretty, but I found the walk so peaceful. The birds twittered, occasionally the river burbled, the wind softly came and went. For at least half the walk I strolled along on my own, enjoying the solitude. [Somewhere up ahead had been a large tour group (30+ people), and I had previously registered my internal annoyance at their presence. I was pleased that they had disappeared. That of course is not a particularly generous thought, and it’s not the first time I had experienced it. I find that large groups of people, talking loudly and almost competing with each other for air really annoy me, especially when the Camino presents an opportunity to take some reflective and peaceful time.] But these comments are a digression for the moment … and I imagine that I will come back to them later.

Once we came off the river diversion road and back main track we arrived at Villalcázar de Sirga. We had a late lunch at probably the flashest Camino café I can remember. Quite a quaint town. At a pilgrim statue we briefly met a German chap who had walked (so far) from Hamburg. He’d covered 2,600 klms so far. He told us that in Paris he swapped his then 13/14 kg backpack for the “trailer” which he was now using. The trailer attached to a waist strap, and he just pulled out along. He said that he had 20 kg in it; and when he first got it he had to check whether it still there as it was so light He showed me a photo of him crossing the Nullabor by pushbike in 2006, when he rode from Perth to Brisbane.

The last 5 klms into Carrión de las Condes brought us back to yesterday’s agriculture again, and then into this pleasant little town. 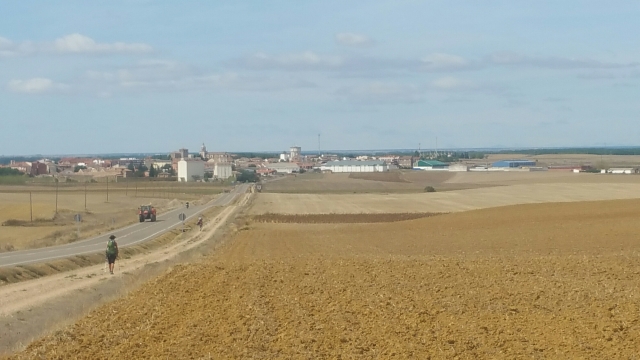 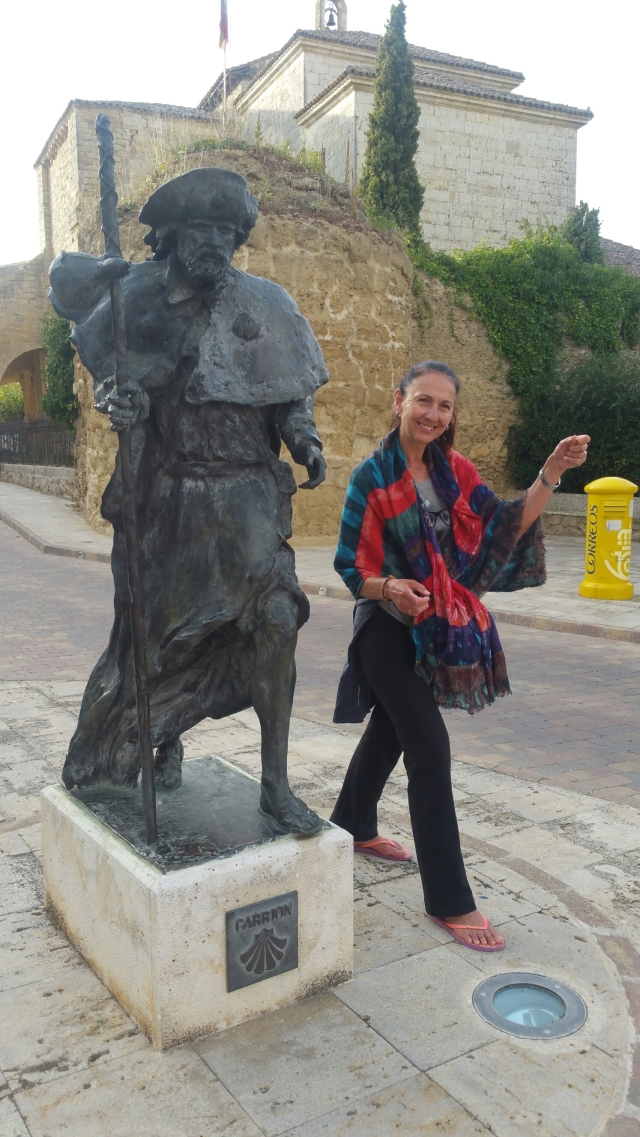 And here’s a bit of history – not necessarily positive. We had a vino this afternoon in the Plaza Mayor, still named Plaza del Generalisimo Franco in a couple of places.

An “average” day tomorrow. Around 23 k klms, into the town of Legidos, just a bit short of Terradillos de los Templarios.