A traveller without observation is a bird without wings – Moslih Eddin Saadi (1210 -1291), Persian poet

[At this stage this story is text only, or very minimal pictures, as the Internet is very slow here and not supporting photo uploads.]

After a lazy start to the day (breakfast at 8 am, 9 am departure), we spent an hour or so wandering around Najera. I may have maligned the town a little in my comments yesterday, as we discovered a whole new side this morning. The monastery of Santa María la Real has a history which goes back almost 1,000 years, and just from what we saw from the outside is a magnificent building. Unfortunately nothing (relatively speaking) opens before around 10 am in Spain, so visits to places are tricky if on the road. So we had to just be content with a quick look from the outside. 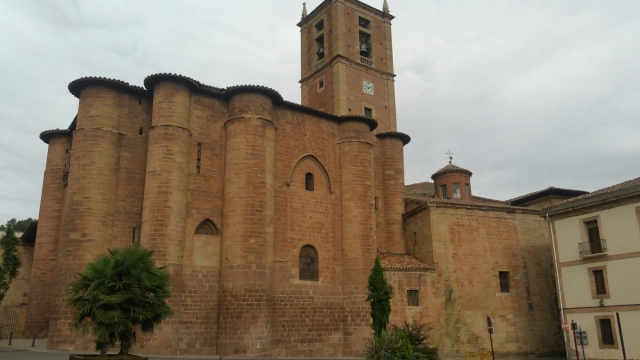 We walked a lot of the day either apart (because I would invariably stop to photograph something), or we simply walked along content in our own thoughts.

So I spent a lot of this quiet time just watching what was happening around me and also thinking about Janet.

The countryside changed during the day. The first part was as described yesterday, and I found myself making layman’s comparisons to what I was seeing and my understanding of viticultural practises at home. Many vines are cultivated by what I assume are ancient practises. Most seem to be completely free standing, and given that some of their trunks are up to around 20cm in diameter I figure that they are very old. I imagine that the fruit off them is magnificent. Most of these are not irrigated, although they may have been in years gone by from the now dilapidated irrigation canals which criss-cross the vineyards. The newer vines tend to be trellised, and many irrigated with PVC based drippers. And yet today I saw some brand new plantings which were free standing. Yesterday I had noticed that many of the wells which dot the vineyards have modern wireless-based electronic controls on them. I enjoyed wandering along looking at and thinking about the systems in use and the comparisons to home.

But my deepest thoughts were in respect to Janet’s and my relationship. I’ve written about this before in previous journals, and for reasons unknown I was again struck at how fortunate I have to have a partner in life who accepts me for all my foibles, and is happily willing to come traipsing off to all sorts of places, even though, in this case, despite the adventure, it causes certain levels of discomfort. I doubt that many men are so lucky.

We had 2 stops today – the first at Azofra where we again met Steve and Clare, and the next at Ciruena, a town stuck in both a past and future time warp if ever was the case. I need to research this further, but on the surface it seems that in times not too distant past a new town was planned. Then I assume that the GFC hit. Row upon row upon row of quite modern apartments sit empty. The grounds are beautifully landscaped, the facilities such as the swimming complex very comprehensive and modern … only that it’s a ghost town. The guide book describes the place as “soulless” – that’s a fair description and at the same time an understatement. There must be accommodation for thousands of people in this town, and yet, apart from one man, a painter who was doing some work on one of the properties, and who gave us some directions out of this strange place, we did not see a single person. There were hundreds of la venta (for sale) signs, although I cannot imagine anyone wanting to buy there and live in isolation. So there’s a Catch-22 if ever there was one.

About this time the agriculture changed The vines slowly disappeared, to be replaced by rolling wheat fields, as well the world’s biggest turnip farm!

And a few creatures along the way too …

Only 5 klms on from Ciruena is Santo Domingo de la Calzada. A biggish town, with some evidence of economic hardship on the outskirts, but nevertheless with a fascinating and vibrant old town. We visited the cathedral, including some of its secret passageways, and climbed the clock tower. This town clearly caters well for the traveller. It seems to have retained its very old character and charm, and at the same time is full of places giving peregrino and general traveller support, be they the various tiendas or range of accommodations, through to the three-language signs everywhere explaining some of the history of the various buildings. It seems to be quite a thriving centre, and I liked it.

Tomorrow is another relativity easy day of around 22 klms as we wend our slowly West to Belorado. That said, weather forecast is not all that good, so could be a bit of a drudge …